About us
Home > About us > Social responsibility
Poverty & Disaster Relief In 2006, Guangdong was hit by the "great blue rainstorm" storm, and it donated technology to the government.

In 2006, the torrential rain caused by the typhoon "biles" caused the worst flooding in some parts of guangdong province in recent years, and the lives and property of people in the affected areas suffered heavy losses.According to the report, there were 563 townships and towns in 13 cities and counties in the province, with a total of 7.46 million people affected, and the direct economic loss reached 13.2 billion yuan.
Serious disasters and party secretary of televised speech touched the heart of the known to science and technology staff from shenzhen build a border town into a modern metropolis, cannot leave the support of the people in the disaster area.Today, when the people in the disaster areas need help most, it is incumbent upon us to do our utmost to help the people in the affected areas to carry out disaster relief and reconstruction work.
The administrative department of the company immediately wrote the "proposal" and made the "donation box". On the noon of August 26, the company donated more than 2500 yuan.The employee said: the water is ruthless, people have feelings, the home is destroyed, the family is still in!We have the responsibility and obligation to extend a helping hand to the people in disaster areas.
"One side is difficult, all in all support" the Chinese nation fine tradition is in the pass technology employee to carry forward, "give a person rose, the hand leave aftertaste!"Give a ray of sunshine to the disaster area, a love! 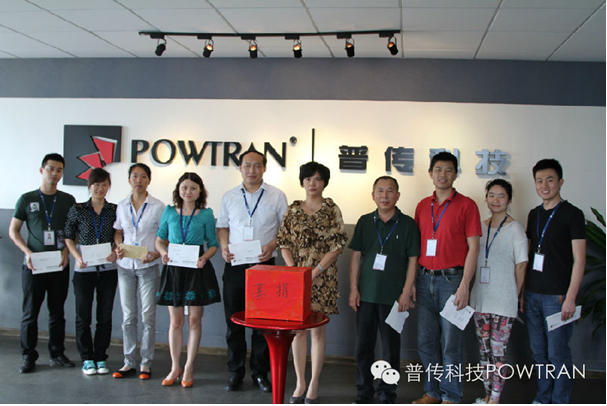 In 2013, Sichuan ya 'an earthquake donation.

Cooperation between school and enterprise

Powtran has cooperated with tsinghua university, dalian university of technology, Harbin Institute of Technology and other well-known universities and research institutes. Since its establishment, Powtran has been committed to the cultivation of talents and is regarded as the "whampoa military academy" in the frequency converter industry. With the increasing demand for skilled talents, vocational colleges there are more and more chance to cooperate with us. Since 2011, dalian electronic school is established under the teachers' enterprise practice base with our company, in a planned way for teachers to our training per semester.Harbin Institute of Technology also arranges teachers and students to visit our company every year.